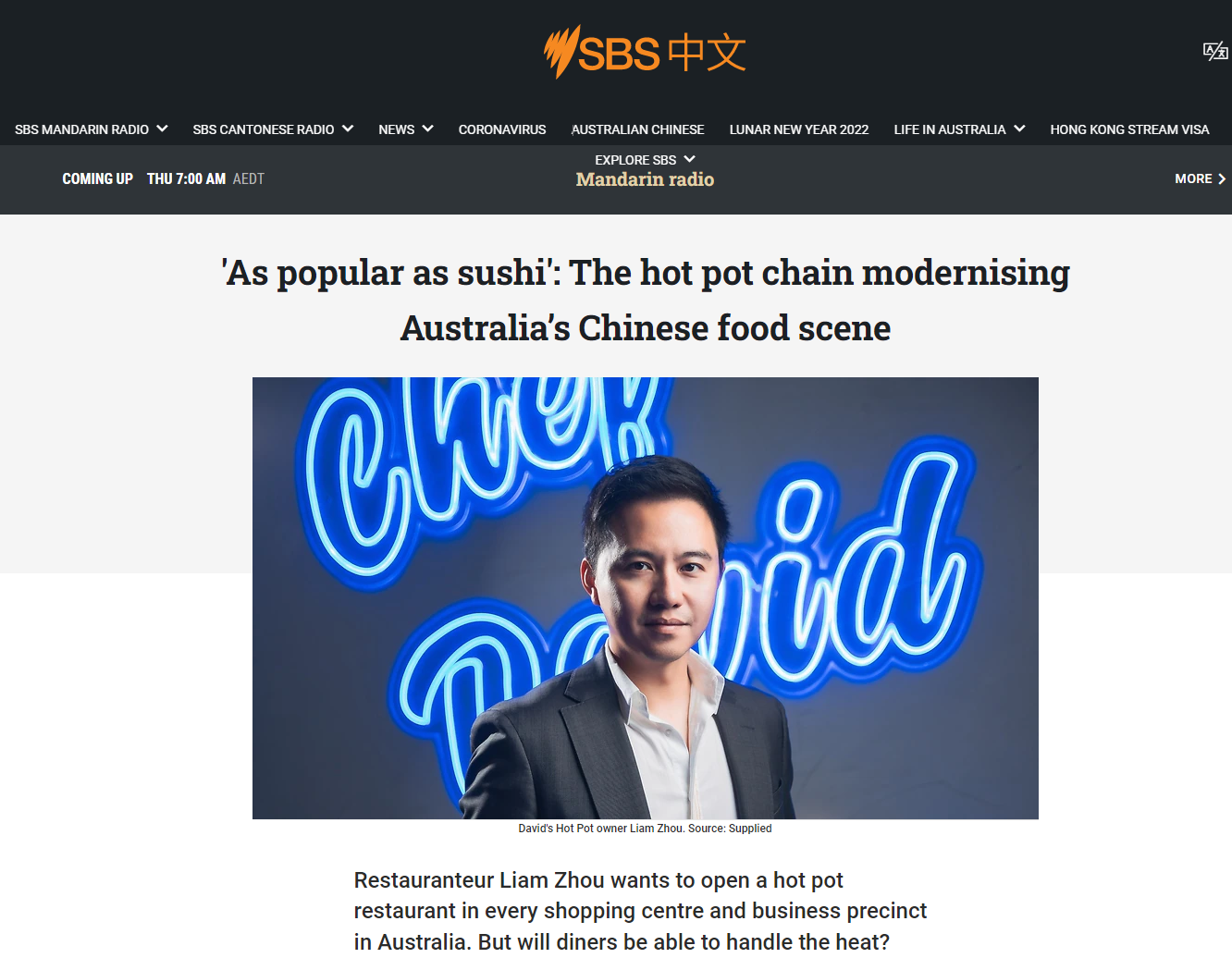 One could be forgiven for believing they were in the wrong place instead of a fine-dining Chinese restaurant.

But these aspects are all part of Melbourne entrepreneur Liam Zhou’s game plan for the local food scene and his latest restaurant, Chef David, which opened in the city’s CBD in February 2020.

The 31-year-old from Sichuan in southwestern China says he wants to shake up the industry with flair, giving diners, particularly young ones, a burst of flavour, albeit a strong one.

“They don’t need to think having a traditional dinner then about where to go next. We are meeting their requirements in the one place.”

Mr Zhou was seeking to become an accomplished business owner when he moved from mainland China to Melbourne in 2007.

After failed coffee shop franchising endeavours after obtaining his bachelor’s degree in hospitality management in 2009, he set about to offer food he knows best – Sichuan hot pot.

He spent 18 months researching ways of introducing authentic pots of broth with boiled ingredients into the local food scene.

As Mr Zhou was looking to find the “next” Chinatown, he set a new precinct record for a leasing a space near La Trobe and Elizabeth Streets in the CBD, paying about $1700 per square metre.

He was attracted to the area’s high density, which was, prior to the pandemic, underpinned by the influx of international students in new apartment towers.

“I always follow developments. I knew how many projects had been approved from the City of Melbourne,” he says.

As the vice president of the Sichuanese Association, Mr Zhou knew its 2000 members well, and they were craving the authenticity of hot pots from home.

His other purpose was to develop local familiarity with Sichuanese cuisine.

“We don’t want you to force you to accept the culture. We want people to like chilli. This is our core value.”

Brakes on ambitions to expand

Half a decade on from the early days when queues would line up around the block of his first hot pot restaurant, David’s Hot Pot, Mr Zhou has a dozen restaurants under his name.

These include more David’s Hot Pot restaurants, a number of franchised and non-franchised fast-food outlets that serve mala xiangguo – a numbing spicy stir-fry pot – and another Chef David branch in Melbourne’s east.

“Their management system is good. They have a lot of people who have grown from the frontline.”

However, Mr Zhou says he didn’t want to emulate the group’s alleged problems with staff underpayment.

“We have our solicitor and consultants to make sure we are on track.

“We are young, and we have really good management and funding systems in place.  We have a lot of young blood here who are passionate in developing themselves.”

Unlike other Chinese business owners who were forced to close down after being hit hard by the pandemic, Mr Zhou has managed to keep all his restaurants afloat.

He even opened one restaurant in Melbourne’s outer western suburbs during the pandemic.

Mr Zhou says he has his leading chef, David Li, to thank for staying ahead of restaurant trends.

“He uses a lot of flavour combinations from Sichuan, Yunnan and Guizhou in southwestern China. He then plates them like Western dishes.”

Mr Zhou says he’ll often encourage his chefs to eat out, whether it’s locally, in Melbourne and Sydney or across southern provinces of mainland so their menu never remains stagnant.

With the help of silent, local investors, Mr Zhou says he’s on track to steadily growing his restaurant empire.

“I’m not chasing the number of store openings. I’m chasing to see if I’m still leading the trend.

“I’m more about how many people are following my ideas and how many new ideas I have for the business.”

However, there is a clear expansion strategy in place.

Over the next two years, Mr Zhou says there is a magic number of restaurants he’d like to have under his name.

That magic number is around 30.

From there, he hopes to move into the Sydney market and beyond.

“We want to open in every shopping centre and very business precinct. Like Sushi.”

If anyone knows authentic Sichuan cuisine, it’s Chef David Li. Chef David has been experimenting with Sichuan flavours since he was 14 years old. Now the executive chef at his titular restaurant, he creates recipes and trains the talented chefs in the kitchen.